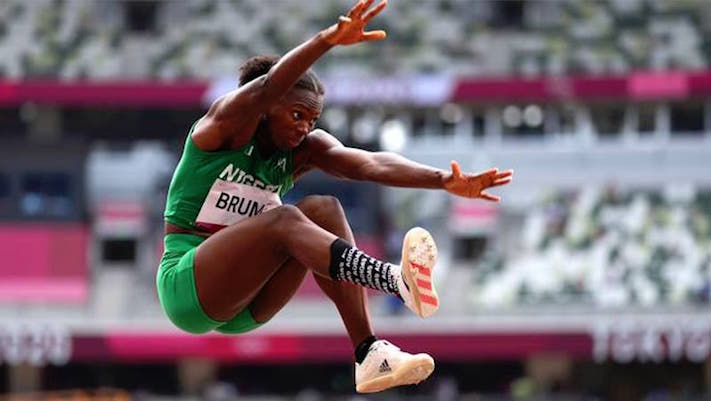 Brume with a leap of 6.97m won Team Nigeria’s first medal at the 2020 Olympics after several attempts and near misses.

The Board described the bronze medal feat as a vast improvement on her 5th position finish at the 2016 Games in Rio after recording a 6.81m jump.

Speaking through its President, Engr Ibrahim Shehu-Gusau, the Board said, “We applaud her tenacity, courage and determination to bring home Team Nigeria’s first medal of the competition.

“This feat is not lost on us as a Federation because it is the first medal in Track and Field at the Olympics since 2008.

“In a year when we are celebrating the 25th Anniversary of Nigeria’s first individual medal through Chioma Ajunwa at the Olympics, you have written your name in gold in the annals of sports history in Nigeria, through your performance”.

Gusau said the Board is over the moon as it rejoices in the Federation’s ability to secure at least a medal for Nigeria, despite recent challenges, as he promised that the AFN will not rest on its oars in its quest to achieve further successes.

“This is the type of story we like to tell. This is not a sudden success but a result of steady growth through training and participation in international competitions. She deserves everything coming her way.”

Gusau is optimistic that the 25-year old can continue her growth ahead of the 2022 Commonwealth Games in Birmingham and the 2024 Olympic Games to be held in Paris, France.