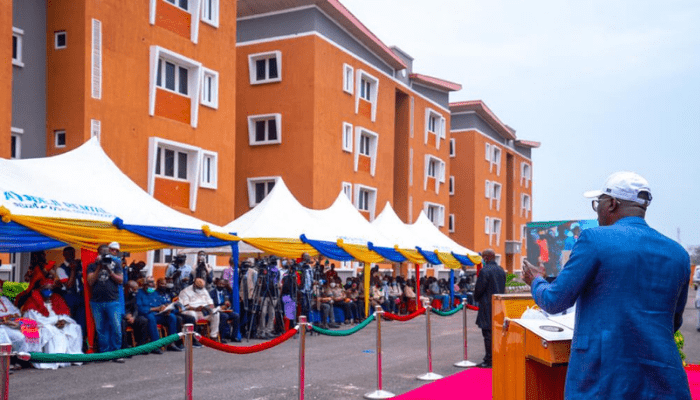 Determined to provide decent homes for its residents, the Lagos State Government on Thursday commissioned 480 units of new homes of different categories built at Ibeshe, Ikorodu area of the state.

The State Government also unveiled plans to build 3,456 homes tagged Imota Workers City, which will be built on 20 hectares of land at Imota area of the state.

The Governor also named the estate after the late prominent Yoruba politician, T.O. S. Benson, who died in 2020 at the age of 89.

He said his administration has created16,904 jobs through the construction work in various housing schemes, adding that the housing projects have direct economic engagements for consultants, contractors and artisans in the state.

According to Governor Sanwo-Olu, provision of housing remains one of the mandates of his administration, and that the commissioning was a fulfilment of his electoral promises.

“In the past two and half years, we have been addressing the huge housing deficit in the State. It is important to note that the gap in supply and demand of homes is not peculiar to Lagos State. Accommodation deficit is a challenge associated with all urban cities in the world. The situation in Lagos is however challenging because of the population growth rate of the State. The massive migration of people from all over the federation to Lagos State places a great pressure on the available housing facilities,” he explained.

Sanwo-Olu however noted that the State Government regards it as a duty to keep building more homes in order to take care of the increasing housing needs of its residents.

While noting that his administration has been able to deliver 13 major housing schemes all over the State by partnering private sector, the Governor said another three schemes are ready and awaiting commissioning at Sangotedo, Odo-Onosa Ayandelu, and Agbowa.

He said that a total of 7000 homes would have been delivered to the people by his administration’s third anniversary. He added that there are still other joint venture schemes at Ijora-Badia, Tolu-Ajegunle, Lekki and Ajah.

Sanwo-Olu however said that the phase II of the Ibeshe housing scheme will have a total of 192 two bedroom flats with supporting infrastructure such as network of roads, drainage system, car park, electricity and water reticulation system.

On his part, Moruf Akinderu-Fatai, commissioner of housing, said the estate which was constructed through the budgetary allocation, is located close to the shoreline, making it a choice residential scheme.

According to him, the project will ensure that housing deficit in the state is reduced and that decent homes are made available to the people.

“With a decent home, the family eco system will be better preserved, living standards will improve and the beauty of the environment will be enhanced, ” he said.

The newly commissioned scheme is situated opposite Nichemtex factory, Ibeshe Road, Igbogbo – Baiyeku LCDA, on a land area of 15 hectares.

It consists of 40 blocks of 480 home units of one, two, and three bedrooms apartments. The units come with fully fitted kitchen, store and a guest’s toilet.