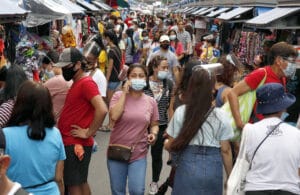 THE local business community and the average Filipino consumer shared mixed views on their economic prospects in the coming months, with consumer confidence outshining that of the business sentiment in the local scene.

Meanwhile, the business sentiment, while remaining positive, weakened as the overall CI declined to 46.4 percent from 59.7 percent a quarter ago.

The CI is computed as the percentage of optimistic respondents minus the percentage of pessimistic respondents in the local economy. A lower confidence index means the pessimists increased versus the optimists during the survey period while a higher confidence index means more optimists from the survey group.

Consumer respondents attributed their more favorable outlook in the near term to expectations of more available jobs, good governance, positive developments in the Covid-19 situation, and additional and high income.

The positive outlook of the consuming public is somewhat a contrast of the sentiment of the business community for the third quarter of the year.

According to the survey, the respondents’ less optimistic outlook for the next quarter was attributed primarily to the “uncertainties” during the leadership transition; continuing public health risks posed by Covid-19; and concerns over rising inflation and its impact on business operations.

The BSP said seasonal downturn in production due to weather disturbances also contributed to the lower optimism.

Other respondent firms also cited higher production costs of automotive components, the adverse effects of the Russia-Ukraine conflict and lockdowns in China due to Covid-19, as reasons for their less upbeat sentiment for the third quarter of 2022.

The sentiment of both groups may linger until the end of the year, as businesses’ CI was also less optimistic for the next 12 months while consumers’ CI was more optimistic.

For the next 12 months, firms’ CI decreased to 59.9 percent from the previous quarter’s survey result of 69.8 percent.

For consumers, however, their CI increased further to 32.4 percent from 30.4 percent.