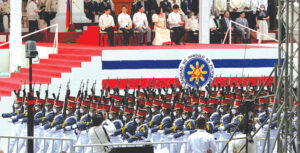 The Philippine National Police reported no untoward incident during the inauguration on Thursday of President Ferdinand “Bongbong” R. Marcos Jr., as he has been scheduled to attend today’s 75th anniversary commemoration of the Philippine Air Force, his first official engagement with the military as its Commander-in-Chief.

Air Force spokesman Col. Maynard Mariano said Marcos Jr. is expected to physically attend the Air Force anniversary, which will be held at its Haribon Hangar in Clark Air Base, Mabalacat City, Pampanga.

Based on the monitoring of the PNP’s Operation Center, Marcos Jr.’s inauguration at the National Museum was peaceful with no significant incident reported, except for the protest gathering staged by at least 5,000 members of different groups.

Among the groups that joined the protest rally were rights group Karapatan, Kilusang Mayo Uno, Bayan Muna, Anakpawis and Courage.

Mariano said the highlight of the Air Force’s anniversary is the expected presence of the Commander-in-Chief, who will witness a high- speed opener by FA-50s and a flyby by other Air Force assets.

Meanwhile, the Department of National Defense said its incoming officer in charge had tested positive for Covid-19.

“Undersecretary [Jose] Faustino [Jr.] will physically report for work after complying with the prescribed quarantine period. He is fully vaccinated and boosted, and is asymptomatic. He will temporarily perform his duties while in isolation,” the defense department said in a news statement issued by its spokesman Arsenio Andolong.

The statement said Faustino came into close contact with a Covid-positive individual during one of his many engagements and consultations “prior to his assumption today, June 30, as OIC, DND.”