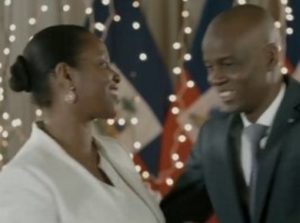 President Jovenel Moise, who has withstood calls for his resignation throughout the year, is promising to work harder to improve the lives of Haitians in 2020.

In a message for the Christmas Season, Moise, who came to power in 2017, noted that the new year must bring with it “hope for things to improve.

“Yes, they must improve, because we will continue to fight without giving up. We will fight for what is due to you will reach you. Every day we work hard in the midst of all difficulties, to unite for and put an end to the ying yang that divides us.

“We need good unity, unity between rich and poor. Unity between those from below and from above.

He is urging Haitians to “stand shoulder to shoulder, to refuse the abuses and violence that are done to our brothers and sisters.

“Let’s learn to hug the other to take the road of progress and true development,” he added.

Moise has been under pressure from opposition political parties that have accuse him of corruption and have been staging violent street protests in a bid to force him out of power.

Moise has denied any wrongdoing and has instead called on the opposition to be part of the efforts to establish a government of national unity.

Meanwhile, .media reports here say that Moise has written to Germeil Castel of the Marriott Accord Committee, inviting him to talks at the National Palace on Monday in in a bid to find a solution to the crisis which has paralyzed the country for many months.

The reports quoted the correspondence in which Moise wants to discuss with Castel, the “document prepared to end the crisis at the Marriott hotel dated November 11, 2019”.

Meanwhile, the Consensual Alternative Passage of Power Commission says it is ready to dialogue with Moïse “if the President wants to meet with us on the terms of his departure”.