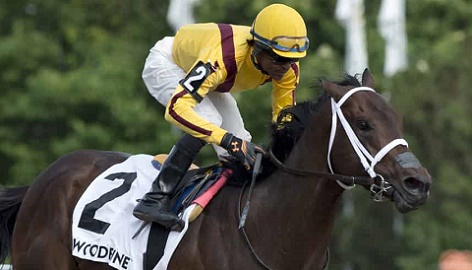 Veteran Barbadian jockey Patrick Husbands capped off another successful season at Woodbine racetrack when he paired with Vanzzy to win the feature CAN$100 000 Display Stakes last weekend and finish with a meet-leading 21 added-money wins.

The 46-year-old, one of Canada’s most successful jockeys, carried the colt gate-to-wire to trounce the two-year-olds by half-length in a time of one minute, 45.90 seconds, going a mile and sixteenth in snowy conditions in western Toronto on Saturday’s penultimate day of the campaign.

Ironically, the race – number three on the 12-race card – proved to be the last of the day as officials were forced to cancel the remaining races due to heavy snow.

On Sunday’s final day, Husbands snatched a lone winner when he combined with hot favourite Big Hambone to beat the three-year-old and upward maidens by half-length, going 6-½ furlongs in race two of the 16-race card.

The seven-time Woodbine champion ended the season with 83 wins from 419 mounts and winnings of nearly $4 million, after dominating the stakes schedule in a campaign which marked his comeback from injury following a serious fall last November.

Having announced two weeks ago that he would probably miss the final weekend of racing in order to undergo surgery to deal with lingering issues from his last fall, Patrick put those plans on hold to chalk up a record fifth win in the Display Stakes, having previously won the event in 1999, 2002, 2005 and 2010.

Going off in steady snow, Husbands broke Vanzzy sharply to produce lazy splits of 26.66 for the quarter and 51.32 for the half, with the rest of the five-horse field tracking.

He shook off a surge from Finalist on the backstretch to enter the stretch full of running and then repelled another threat from 9-5 favourite Elusive to reach the wire first.

“I just [got]out front and [got] going,” Husbands said afterwards.

“I did everything the first quarter, the first half and about four and a half out, I had to get my horse going – he got lazy on me – and by the time I got to the three-eighth pole, I was on a different horse and I just kept him alert.”

Husbands also captured race one on the truncated card when he paired with 3-1 chance Bells of War to get the better of the two-year-old fillies by two lengths going seven furlongs.

“It’s an honour and pleasure that the owners and trainers stick with me throughout the whole year,” he said.

“I’m not riding much, but everybody is still putting me on one or two live ones. I’ve got to tip my hat off to all the owners who invest in these horses, you know, there’s so much on the line. But I’m blessed.”