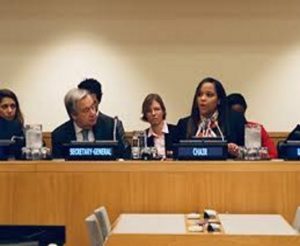 The committee, which is chaired by Grenadian Keisha Aniya McGuire (Grenada), will also be holding meetings in Antigua and Barbuda.

It is tasked with overseeing implementation of the Declaration and in order to fulfil that mandate, and in accordance with relevant United Nations resolutions on specific Territories, it undertakes visiting missions to ascertain the situation of their respective peoples.

According to a UN statement, the objective of the December 17-20 visit “is to gather first‑hand information on the situation in the Territory, focusing on its political, economic, social and environmental development, as well as the challenges of attaining sustainable development, particularly the impact of volcanic eruptions occurring since 1995”.

It said that the mission’s findings will be presented to the Special Committee in the form of a report that will be made available to the public.

The other members of the Special Committee will come from Antigua and Barbuda, Indonesia and Sierra Leone.

Administered by the United Kingdom, Montserrat has been on the United Nations list of Non‑Self‑Governing Territories since 1946.