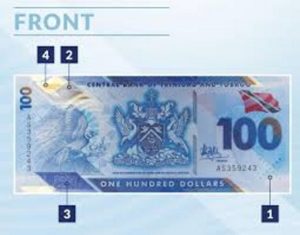 The Trinidad and Tobago government Monday dismissed reports that counterfeit copies of the new one hundred dollar bill were in circulation after a video surfaced on social media claiming to show the fake bills.

National Security Minister Stuart Young said that it is near impossible to duplicate the polymer bill that went into circulation last week and is due to replace the old one hundred dollar bill that will no longer be legal tender here as of December 31st this year.

The government had introduced the new bill in a bid to deal to counter money laundering and other illegal activities.

“At this stage there is no evidence of counterfeiting or anyone counterfeiting in mass the new polymer bill. As we have said and the Central Bank (of Trinidad and Tobago) …the experts on this the polymer note is almost impossible to counterfeit.

“Persons should make themselves aware via the education of the Central Bank of what are the security features of the new polymer note,” Young said, adding “just by touching a polymer bill compared to a cotton or paper bill you will immediately be able to tell the difference”.

He said what was being circulated on social media “does not have the transparency security feature.

“At this stage there is absolutely no need for persons to be following the road of the social media …or having any cause for concern,” he said, urging people here “just be aware”.

President of the Downtown Owners and Merchants Association (DOMA), Gregory Aboud said that people should take comfort in the fact that there has been no counterfeit version of the TT$50 (one TT dollar=US$0.15 cents) note that has been in circulation here for more than a year.

“We don’t expect to have much of an issue with any counterfeit polymer note. The truth is the polymer note specifically has a number of features which make it appealing,” he said adding “it is almost impossible to counterfeit or to copy a polymer note”.