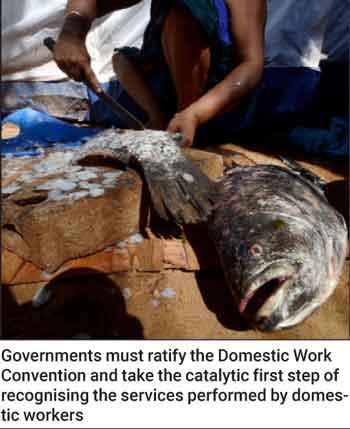 When I took up my role as the Regional Director of the International Labour Organization in Bangkok, domestic workers were at the forefront of my mind. Not only is the Asia Pacific region home to half of the world’s domestic workers, but this group of workers exists at the nexus of so many areas of my own personal interest – the rights of women workers, health and housing, international cooperation and migration governance.

For so many of us, it is impossible to think about the issue of domestic work without emotion. Many of those reading this will have had close relationships with domestic workers: in childhood, as vital household support later in life, or for those with special care needs. Others will have been able to support their families or made additional income through wages from domestic work.

Domestic workers do so much for us. They keep us safe, in comfort, well fed as well as enable work outside of our homes. When we consider domestic work in our own experience, it is often in such a positive light. The emotional bonds that are forged by sharing a home, and the feeling that domestic workers are ‘part of the family’ are aspects of this job that make it ‘work like no other.’

However, in 2011, the adoption of ILO’s Domestic Workers Convention finally recognised domestic work is also ‘work like any other’. Known as Convention 189, it was the first international instrument to establish that, despite all the very specific and personal experiences of domestic work, domestic workers deserve protection, just like all other workers.

The Convention gave fresh momentum to domestic workers and their allies who had been fighting for years to ensure that domestic workers were entitled to basic labour rights such as access to minimum wages, safe working conditions and protection from discrimination. This international recognition remains especially critical, because we know that 10 years on, many domestic workers still remain underpaid, overworked, harassed and exploited.

This year, the ILO has looked at just how far we have come over the last decade in achieving the goals of the Domestic Workers Convention. Despite some progress – notably The Philippines has ratified the Convention and several other countries in the region have improved legal protection for domestic workers – we still have a long road to travel until we realise decent work for domestic workers in the Asia Pacific.

There are myriad reasons why we must use this anniversary to reinvigorate our commitment to improving conditions in domestic work. In the global push towards women’s empowerment, domestic work plays a crucial role. The vast majority of domestic workers are women and the sector offers employment opportunities to those who may have few qualifications and to migrant women who may be unable to gain access to the labour markets at home and risk so much to take up these opportunities.

More broadly, it is not hard to see how the varying intersections of gender and social norms have influenced the status of domestic work and domestic workers in society. Work in the home has traditionally been unpaid, and not considered an economically valuable job. Because the home has not generally been considered a ‘workplace,’ many countries still do not include domestic work as formal employment meaning domestic work is not yet recognised as work within labour legislation.

The informality of domestic work contributes to its invisibility, and this in turn, creates a circumstance where the plight of domestic workers is more easily overlooked. When domestic work remains informal, workplaces aren’t registered, working conditions aren’t monitored and domestic workers’ access to social security, income protection, and even the COVID-19 vaccine, is limited. Until domestic work is truly recognised for what it is – work – it will be difficult to fully capture domestic workers’ contributions to our broader socio-economic wellbeing.

We therefore urge governments to ratify the Domestic Work Convention and take the catalytic first step of recognising the services performed by domestic workers.

At the ILO, we advocate for this not only because it is the right thing to do, but also because the opportunities for advancement and the scope for changes to the sector having a transformative effect on domestic workers’ lives are immense.

Domestic work needs to be considered as an even more essential source of employment in post-COVID-19 economic recovery, as a job-intensive sector that meets growing household needs for care services and provides employment opportunities for women who have been hardest hit by the pandemic.

(The writer is ILO’s Assistant Director-General and Regional Director for Asia and the Pacific.)