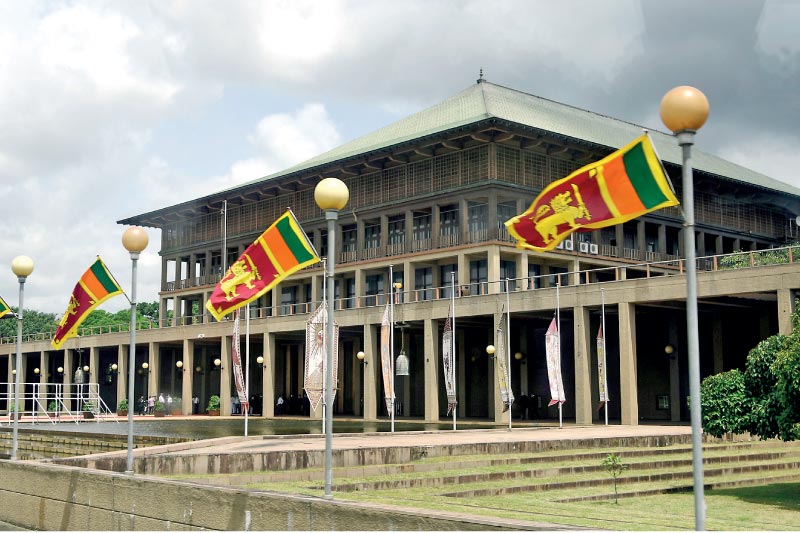 When will this judgment, which has accelerated Sri Lanka’s stray journey, be reversed? It can easily be corrected by Parliament – Pic by Shehan Gunasekara

If a particular community, group or an individual in Sri Lanka, subjected to severe injustice and had failed to secure justice over time in the country despite persistent attempts for redress, resorts to the UN Human Rights Commission or its Committee in Geneva for its intervention for justice, it is considered a serious act of treachery and great betrayal of the nation.

The Tamil people were the first to be branded with this labelling, and now the Cardinal is encountering it. It is the governing authority of the country and not the affected party or the victim that should be held responsible when the latter is deprived of the justice in the country in which they live.

A litigant pursuing a case before a lower court has the right to appeal against the judgment to a higher court if he finds that the judgment delivered by the former is not fair and reasonable. It is not considered as an act of disobedience to the Court or a waste of its time.

Similarly, the opportunity granted to make complaints to the UN Human Rights Commission or Committee under the Covenant of Civil and Political Rights should also be considered from the same angle and as a very important right of citizens.

Thereafter, I was compelled to engage myself in a protracted legal battle against the Criminal Defamation Law as well. Perhaps I must be the only newspaper editor who had to face the highest number of lawsuits under this law. It was also used against other newspaper Editors like Sinha Ratnatunga, Lasantha Wickrematunge, Sunil Madawa Premathilaka and Bandula Padmakumara. They faced their cases within the existing framework of the law. But, on the contrary, I chose to face the cases against me by challenging the very basis of the criminal defamation law itself.

First of all, I made a preliminary objection to all the major lawsuits filed against me and then pursued a policy of going to the Court of Appeal challenging the decisions given for the objections. Finally, taking all the cases together, a fundamental rights petition was filed in the Supreme Court challenging the Attorney-General’s policy of prosecuting me under that law.

I challenged the Supreme Court decision utilising the rights granted to the citizens of the countries which are signatories to the International Covenant on Civil and Political Rights and its Optional Protocol (i.e. the right that allows a citizen to file an appeal to the UN Human Rights Committee in Geneva when he/she has failed to seek justice from the Supreme Court of Sri Lanka). It can be considered as a case that has opened a new vista for the citizens who have been deprived of justice in Sri Lanka.

I was able to win that historic case filed against the Sri Lankan Government. In a letter addressed to the Human Rights Commission, the Government of Sri Lanka assured the former that it accepts its decision on my appeal and would work out an appropriate compensation for me. No such assurance has been given in any other subsequent judgment relating to Sri Lanka. However, I have not been paid the promised compensation; and now the criminal defamation law is not in the rule book.

Thereafter a significant number of citizens who had been unsuccessful in securing justice from the judiciary in Sri Lanka took their grievances to the UN Human Rights Committee. Some of them won their cases. One case is of symbolic significance. Tony Emmanuel was an English teacher. He made a complaint to the Judicial Service Commission when he failed to obtain certified copies of a case heard against him from the relevant Labour Court.

Meantime President Chandrika appointed Sarath Silva to the post of Chief Justice at a time when the Supreme Court had initiated and pursued an investigation against him based on two complaints lodged by two of us during his tenure as Attorney-General. Her action had provoked strong international opposition. At the same time, I reported the news of the oath-taking ceremony of him (the Chief Justice) before the President, with the picture of the occasion turned upside down, on the front page of the Ravaya newspaper as a black issue in protest.

Further, three of us filed three separate fundamental rights petitions challenging the appointment of the new Chief Justice. The case attracted international attention. A number of international organisations had collectively arranged to send a retired Chief Justice from Kerala, India to Sri Lanka, as an independent observer, on the days the case was heard in the Supreme Court.

Messing up the Judiciary

The Chief Justice, despite Tony’s objections, heard the case filed by him before a panel of judges which included him (Chief Justice) as well, and sentenced Tony for one year imprisonment for contempt of court.

The drama did not end there. Tony had to spend most of his sentence in hospital as he was fatally beaten by the prison officers when he was admitted to the prison. Dato ‘Param Coomaraswamy, the UN Special Rapporteur on judicial justice also visited Sri Lanka to see Tony while he was being treated at the hospital. A few days after his release from prison, Tony had a miraculous escape from a violent attempt to abduct him. Eventually, Tony was compelled to leave Sri Lanka and flee to Canada to save his life.

There was a long queue of cases against Chief Justice Sarath Silva before the Geneva Human Rights Commission. It was a big challenge he had to face. Although the cases had been filed against the Sri Lankan Government, almost all plaintiffs had filed their cases based on illegal activities of Chief Justice Sarath Silva. The Human Rights Committee had issued a number of rulings against him. Tony won his case. S.B. Dissanayake also won his case. District Judge Palitha Bandaranaike also won his case.

The illegality of this ruling can be said to have been well-considered internationally. The verdict can also be considered as a fraud committed by the Supreme Court which I hope to talk about separately. More than 15 years have lapsed since this error was committed and it has not been rectified yet. By doing so, the Supreme Court of Sri Lanka has deprived the people of Sri Lanka of the rights that the people have inherited from the Covenant of Civil and Political Rights.

Even after the change of the government in 2015, this error was not rectified. Even the human rights activists of Sri Lanka do not appear to have made any significant effort to rectify the situation.

When will this judgment which has accelerated Sri Lanka’s stray journey, be reversed? It can easily be corrected by Parliament. The Supreme Court also has the power to rectify the situation. The United Nations can be considered as a powerful and massive assemblage of the nations of the world. There are 195 countries in the world of which only the Vatican City and Palestine have no membership in it. Yet these two countries have received the status of full observers. Human rights are the key link that binds all member countries together. Human rights are the inalienable rights of every human being.

In 1966, the Covenant on Civil and Political Rights, the Covenant on Economic, Social and Cultural Rights, and the Optional Protocol to the Civil and Political Rights were adopted. The countries that have signed the two Covenants and the Optional Protocol are subject to the supervision of the Committee of Experts on Human Rights. Inter-state petitions and inquiries are scrutinised there.

Serious infringements of human rights in a country imply that the rulers of that country are violating the rights of the people of that country. When a country is encountered with such a situation, the citizens should have the right to complain to the international community particularly when there are no remedies available locally to overcome the situation. It cannot be considered a betrayal of the nation, but a right that the people should exercise. It is those who violate human rights of the people, not the victims who should be considered as traitors.