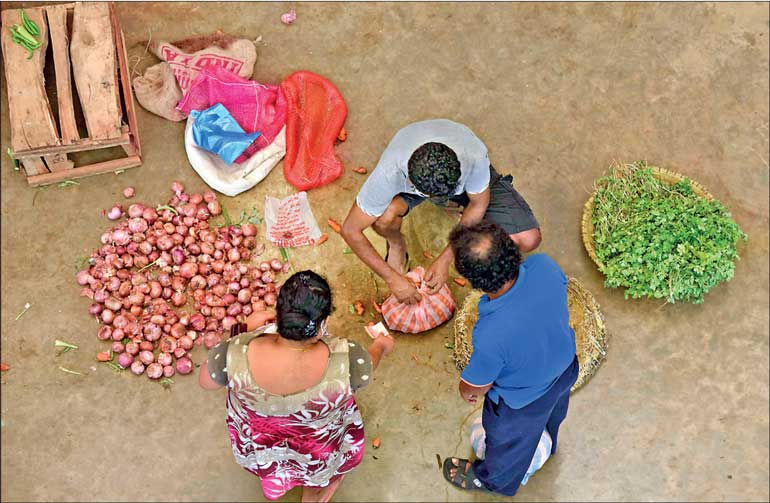 It is at this point hard to peg what we’re up to or where we are. The economy is in tatters, the “buzz” in the global press is “crisis” and “emergency” and the reality on the ground for those who have livings to make and businesses to run is fairly disastrous – Pic by Shehan Gunasekara

It is at this point hard to peg what we’re up to or where we are. The economy is in tatters, the “buzz” in the global press is “crisis” and “emergency” and the reality on the ground for those who have livings to make and businesses to run is fairly disastrous.

To see what alternatives there are, we can cast a glance at the far more functioning economies neighbouring us, who have done currency swaps or given us loans, facing the same virus. A few weeks back, when Imran Khan spoke about refusing to mortgage his society and economy to inevitable poverty and instead keep the country open and have more targeted shutdowns, it was a weekend when ICC here was also speaking about “smart lockdowns”, and we were hearing echoes from business leaders, and even our new Health Minister…all speaking prudent wisdom re mitigation. And then with nary an explanation, off we went into another week of confusion, chasing an already spread airborne pathogen that cannot be “locked in”.

And then, yet again, citing some “experts” who demand their pound of flesh, themselves comfortably paid, saying “at least four weeks”. This while, Denmark has shelved all COVID regulations, Singapore has said we have to treat this as endemic and stop mass testing (which is the WHO position), Sweden has already proven the point (below five-year mortality average), the “open” US states had surging positive tests, but tame mortality and the seasonal surge is petering out and Florida and Texas and South Dakota are still open, unmasked, and non-locked down.

You cannot argue “ideology” in the face of facts. Minimally locked down Japan and Taiwan are still among the region’s success stories, while highly-vaccinated Vietnam has now slid from one of the icons of COVID handling to a relative disaster, with case and death surges and a recent shutdown of their capital and impairment of their economy. Australia is in multiple shutdowns, with literal internment camps, and people actually wondering which is now freer, Afghanistan or Oz?

So, we are overdue to open, we have to restore economic balance, we have to let our businesses compete, and balance sheets to be revitalised, and to realise we had negative excess mortality last year, there is no net all-cause mortality surge reported this year (this is also dengue and influenza season of course), and we still manically keep using the unreliable PCR test on everyone who dies, even if not vaguely C-19 symptomatic.

“End mass testing.” It costs us a fortune we don’t have and need to deploy elsewhere. And there are early treatments by which more and more people are privately treating themselves…far better than sitting awaiting plunging oxygen saturation and ICU. And that tide is happily turning.

Vaccinations are helping, but they don’t immunise or stop transmission, Israeli and UK data, and now Mongolia, are inescapably clear here. So, we need the early treatments, and we need to let this be endemic, and go back to being a country and society and not a perpetual viral ward for a pathogen primarily of risk to those above 60 with multiple chronic illnesses. Let’s treat them and guard them, and keep a strong, vital society around them.

At times it seems we are listening to two sets of scientific guidance. Esteemed people tell us to lock up, mask up, get jabbed, and throw out extrapolatory numbers forecasting tens of thousands of deaths as if truly the black plague has come calling. And it hasn’t. Remember those largely open jurisdictions, much of Asia and Africa, they prove otherwise. Even if there is underreporting in some of those areas, there aren’t tens of thousands, much less hundreds of thousands of corpses, stealthily stockpiled somewhere. The suggestion is blatant nonsense.

The reason for the “disconnect” is all the above prescriptions come from modelling, almost all of which has been incorrect.  Remember all the “experts” who assured that the fall of Baghdad would lead to an “Arab Spring?” Forgetting the disorder, the chaos, the lack of any institutions left in place to run a society, and disenfranchised people with weapons for hire. Beware models. Someone on the ground, could have, in fact tried to, advise otherwise. They were swatted aside for well-paid experts who fed the narrative.

So, if you consult COVID “data” there is really no debate. And I humbly suggest, it’s high time we forget pedigree of where the advice comes from, and ask what data it is anchored in, and refuse generics, insist on specifics.

Here are just a smattering of things that “ideology” got wrong, and we have the data to prove it:

Modellers bypass the suspension of civil liberties, arguing they staved off disaster until the advent of the “vaccines”.

Those looking at data, point out that as per the Oxford Stringency Index, there is an inverse relationship between severity of such measures and positive health and mortality outcomes. And those not deploying these, fared no worse, in many cases better. Also, they point out the precautionary principle, collateral damage and comparative costs and impact have not been assessed. All the world cannot rationally or even ethically revolve around a pathogen that at the height of its novelty in 2020 was not anywhere among the top 10 causes of mortality. And almost half the deaths ascribed to it, came from care homes, or homes, whereas the impact from deferred or neglected care or the millions plunged into poverty from lockdowns is hard to even fathom. And the “vaccines” don’t immunise, so while their therapeutic benefit for the vulnerable is welcome, the ROI is far from clear.

If you begin from a pharma led economic model that is fixated on universal vaccination, then naturally available, cheap, efficacious and safe therapeutics are a mortal threat. Though monoclonal antibodies are FDA approved, they lie unused in the US, though they can stave off C-19 if applied early. The ludicrous attempt to demonise HCQ and Ivermectin, both hyperbolic attack campaigns evaporate upon the slightest inspection (fraudulent articles in Lancet and Rolling Stone come to mind), show the sheer terror here. And now the pharma companies are working on their own anti-virals, almost confessing that three to four annual booster shots won’t fly, and what we are being vaccinated with, relative to emerging variants, is the equivalent of last year’s flu shot. Quite a global campaign! “Save the world by taking last year’s flu shot!”

Desperate attempts to rewrite “immunity” by WHO are now amply discredited, as the US CDC scampered to change the very definition of “vaccine” a few days back from something that confers “immunity” to something that provides “protection.” When you next eat a papaya, remember you may be “vaccinating” yourself. I exaggerate, but it does make the point.

It is unclear why those not at risk (most of the population), should not be allowed to develop natural immunity, rather than be in thrall to pharmaceutical companies with “non-immunising” solutions rushed through safety trials, which are better described as “gene therapy” (the description in their own EUAs). And if indeed these “vaccines” prompt cells in the body to synthesise the “spike protein” (which causes the illness), this protein may well, it has been alleged in medical journals, “result in the pathogenesis of certain diseases.” Anyway, with other treatments with overwhelming results and none of these concerns, and such a low infection fatality rate overall, the “mania” to inflict this on everyone reeks of something other than public health concern.

The data is clear. The models are “thought experiments”, and do not take human, ethical or social considerations into account. They are not meant to.

As the authors of a recent paper, ‘A Tale of Two Scientific Paradigms,’ summarise:

Assessing the pandemic: Modelling vs clinical and epidemiological data

So, we vacuously studied Australia and Vietnam and Germany (also outperformed by Sweden). We should have been studying Sweden, Florida and Japan. And remember the assessment is COVID results WITH an open, functioning society, where people still recognise their lives and can interact. “No society, no COVID” is a pyrrhic victory if a “victory” at all.

In too much of the world instead the following description, in thrall to models, and ignoring facts has held true:

Core values undermined; sense of country compromised. Lockdowns repeatedly imposed that don’t work and cause harm we haven’t come close to aggregating, never enumerated as we dare not look it in the face. Wildly inaccurate modelling that predicted catastrophe and despite recurring inaccuracy delivered riches and prominence to forecasters. A succession of non-medical interventions with no basis in science and no public understanding that’s the case, the tragic combination of the authoritarian ruler and the low information voter. Punitive policing, absence of clarity, no expressed leadership strategy or course correction based on results. Incoherent messaging from the top. Disastrous politicians rubber-stamping noxious and untenable ideology, replete with magic money tree economics. Relentless “positive test” announcements, cronyism to power so any dissent is removed, and a radical social experiment asserted against decades if not more of epidemiological wisdom.

So, we have to shake off the stupor. And our leaders here have to enlarge our vision and bolster our will, and their own. We must “see” the many victims here. We must open schools, all those countries that did, had no associated cause for alarm, children are not at risk. Hospitals must no longer shun those in need. People should not be repeatedly locked in their own homes. Businesses should not be ordered to destroy themselves. Incessant scare-mongering needs to be taken off media channels. Rights and freedoms must be restored to their place of unquestioned dignity…” we hold these truths to be self-evident” indeed…

We must not cower; we must locate courage. We must find like-minded activists who want to carve a future worthy of the talent, energy, and inspiration of this country. Let’s take our economic medicine and shelve “magical thinking”. Let’s show the zeal and fortitude we have before. It’s time to transcend the monumental stupidities and inhumanities of this period. High time.