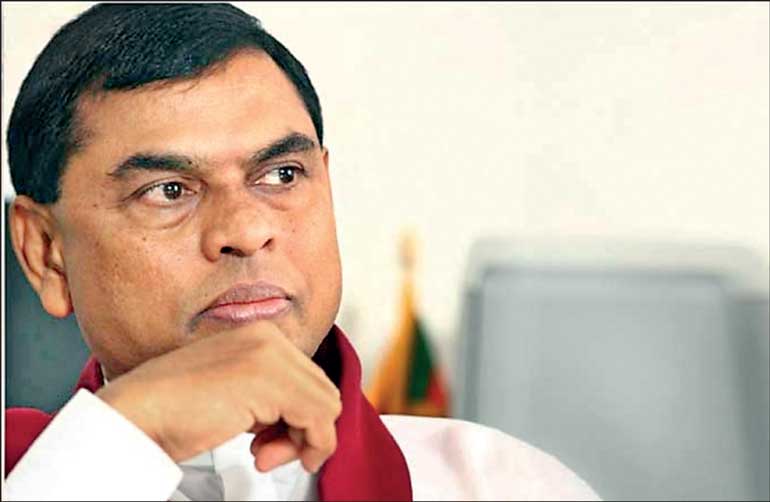 Strangely, the new Finance Minister Basil Rajapaksa has been silent on this issue, perhaps keeping his options open

Closing the door to IMF

Central Bank Governor Deshamanya Professor W.D. Lakshman, in an interview on Derana’s Hyde Park last week, reiterated the stand of the present Government that it will not seek any bailout from IMF (available at: https://www.youtube.com/watch?v=uYynqRPGzX4).

This was one day after Sri Lanka kept its unblemished record of meeting all foreign debt obligations on time by paying in full the International Sovereign Bonds or ISBs of $ 1,000 million that matured on 27 July 2021. This was done by using the existing foreign reserves of the country and minimising the dollar outflow by arranging with the local banks to reflow their maturity proceeds to Sri Lanka Development Bonds that are to be issued on a future date.

State Minister of Finance Ajith Nivard Cabraal, a former Governor of the Bank himself, congratulated the Government on keeping its promise untarnished (available at: https://twitter.com/an_cabraal/status/1419681474526302212). He expressed his sympathy for those who are deemed to have incurred a loss by overreacting to rating agencies and analysts’ reports. He too had previously maintained in an answer to a question raised in Parliament that Sri Lanka could resolve its debt issues without the support of IMF (available at: aszhttps://www.lankabusinessonline.com/sri-lanka-can-manage-current-debt-obligations-without-imf-help-says-cabraal/).

Recently, in an interview with Sunday Times, the de facto policy chief of the Gotabaya Rajapaksa Administration, President’s Secretary Dr. P.B. Jayasundara too had reiterated that going to IMF was not the solution (available at: https://www.sundaytimes.lk/210725/news/presidential-secretary-says-imf-not-the-answer-450239.html).

Strangely, the new Finance Minister Basil Rajapaksa has been silent on this issue, perhaps keeping his options open. But as it is, the Gotabaya Rajapaksa administration appears to be firm on the stand of not seeking IMF support to rescue Sri Lanka’s economy badly battered by worsening macroeconomic conditions exacerbated by the outbreak of the COVID-19 pandemic. Despite many suggestions by analysts, including this writer, the Government will seek to implement its own home-grown policies to rescue the economy without the support of IMF at this crucial hour.

Delaying the move to IMF will be costly

However, the experience in the past has shown that many policymakers and top politicians who had spoken valiantly against any type of IMF support had finally yielded to the pressures of the market and changed their stance. The most recent example was that after the Good Governance government was set up in 2015, its Finance Minister Ravi Karunanayake refused to seek IMF support to resolve the growing balance of payments problem of the country. Instead, he claimed that a Belgian investor had agreed to supply Sri Lanka with a deposit of $ 3 billion. He did not change his stance, nor did his Government, when it was pointed out that such an inflow may be a fake and smelled of an instance of money laundering (available at: https://www.ft.lk/columns/the-illusive-rescue-of-the-rupee-by-an-elusive-belgian-investor-is-the-yahapalana-government-on-the/4-519497).

When the Government decided to go to IMF, it was too late, and the rescue package was delivered only by July 2016. Because of this late adoption, it could not deliver the expected results. As a result, President Gotabaya Rajapaksa inherited a problem economy that demanded tough measures for effective resolution. Hence, when a country is facing an acute balance of payments problem, a delayed decision for a rescue package is extremely costly and the late delivery of support would not bring in the desired results.

Wittingly or unwittingly, the present Government too has fallen into this trap. If it one day decides to go to IMF, it will be too late. Hence, the present Government does not have a choice but to go along with its own plan of resolving the country’s balance of payments issue. That will involve, as Governor Lakshman had eloquently pronounced all the time, going ahead with the much-publicised alternative policy stance.

A Finance Minister on a tight rope

This is the formidable challenge faced by the new Finance Minister Basil Rajapaksa. His choice is like the paradox faced by the proverbial villager who was given an impossible choice: if he stayed in a place on route to house, he would die; if he went home, his wife would die. That was because, unknown to him, a cobra had lodged itself in his travel bag and whatever he did, it was an unbearable cost which either party had to take. Similarly, there is a cobra that had entered the coffers of the Treasury making the choice which finance minister had to make an impossible one. This will make the preparation of the Budget 2022, his maiden budget, a choice involving imposing enormous costs on some section in society.

The impossible three tasks of the new Finance Minister

President’s Secretary Dr. P.B. Jayasundara had given a clue about it in an interview with the website EconomyNext (available at: https://economynext.com/dramatic-change-in-new-sri-lanka-finance-ministers-2022-budget-84313/). Claiming that the new Finance Minister will make a ‘dramatic change’ in his Budget 2022, he had said that the Minister is a practical person plus ‘market-friendly, state-friendly, and business-friendly’ too.

This was how the open economy with a human face preached by Chandrika Bandaranaike or social market economy of Ranil Wickremesinghe failed in attaining their goals. If all the three goals are pursued, it is an iterative process. The algorithmic formula requires the policymaker to follow one ignoring the other two and then return to the ignored goals one after the other. But once they return to the ignored goals, they are no longer in the previous condition. Once they are fixed and the policymaker returns to the original priority, it is also changed beyond redemption.

If a balancing act is required, it is like an acrobat walking on a tight rope holding three burdens at the same time in his two hands. If he tilts to one side, say to the state sector, he will fall. Similarly, if he tilts to the market side, he will also fall. The same is true if he tilts to the business sector. Hence, the Budget 2022, it appears, instead of bringing a dramatic change, will drive the new Finance Minister to an inescapable trap. He should be wary of this pitfall if he is a practical man as claimed.

Can a country rescue itself without an IMF program? It can, provided it will introduce an economy-wide reform and restructuring program on its own. Singapore has set a good example for this.

Singapore joined both the IMF and the World Bank in 1966 one year after it got separated from Malaysia. Singapore’s Finance Minister at the time, Lim Kim San, while presenting the Bretton Woods Agreement Act in Parliament, justified seeking IMF membership on three grounds (available at: https://eresources.nlb.gov.sg/history/events/c3b556e3-06b6-4b39-87dc-84f39842faf2 ). They were: boosting Singapore’s capacity to manage its balance of payments, instilling confidence of the global community in its monetary policies, and gaining access to continued IMF technical expertise and advice on Singapore’s economy.

Further, joining IMF was a prerequisite for joining the World Bank which might extend some development loans to infant Singapore. But apart from the technical advice, Singapore did not go for an IMF program. There was no necessity for such a program either. That was because Singapore continued to implement the needed reform programs on its own.

How Singapore implemented the reform programs has been explained by its first Finance Minister Dr. Goh Keng Swee in an article written for the silver jubilee commemoration publication of its Currency Board. Explaining why Singapore chose to continue with the Currency Board system, though it was a relic of the colonial rule, Goh says that Singapore’s old guard felt the necessity to establish discipline among its ruling politicians. Unlike a central bank, a currency board cannot print money for financing the government expenditure programs because it has to maintain an equivalent amount in foreign exchange when it issues currency. If the country does not earn fresh foreign exchange, it cannot print new money.

Similarly, if the country loses foreign exchange, an equivalent amount of currency already released will be withdrawn from circulation. Hence, there was an incentive for the ruling politicians to implement schemes to earn fresh foreign exchange. Dismissing the extant popular view that central bank printed money could generate prosperity, Goh says that the old guard did not buy that idea. According to them, the central bank money cannot bring in prosperity. Prosperity is generated by hard work done by all citizens, students in schools, undergraduates in universities and technical colleges, and workers in workplaces.

By adopting this type of a policy stance, Singapore’s old guard wanted to give messages to three types of people: its future politicians, citizens and people in the rest of the world. The message to its future politicians was that if they needed to have vote catching expenditure programs, they should bring that money from homes and not the money printed by the central bank. The Singaporeans were warned that if they needed better public services, they should be prepared to pay for them and not expect free lunches.

The message to the people in the rest of the world was the important one. It simply said that they could leave their savings with Singapore and the country would invest them prudently so that they would be paid an attractive rate of return, while ensuring the safe return of the principal.

No alternative for prudence

Accordingly, Singapore adopted a prudent budgetary policy and monetary policy throughout its post-independent history. From 1965 to 1973, the budget was balanced, from 1974 to 1987, a slight deficit, and thereafter, a budget surplus (available at: https://graphics.straitstimes.com/STI/STIMEDIA/Interactives/2015/02/budget_singapore_2015/index.html). Its monetary policy was so restrictive that its inflation rate was lower than that of its main trading partner, USA.

Hence, the Singapore dollar which was exchanged for S$ 3.32 per US$ in 1960 continued to appreciate in the market ending at S$ 1.35 per US$ by end-July 2021. In the external sector, Singapore had a slight trade deficit from 1965 to 1982, but a growing trade surplus thereafter (available at: https://www.macrotrends.net/countries/SGP/singapore/trade-balance-deficit). Its current account was in deficit from 1965 to 1987 and was in surplus since then. As Singapore managed its finances well, there was no necessity for seeking IMF funding.

Sri Lanka which shuns IMF now can learn a few lessons from Singapore. Maintaining fiscal and monetary discipline is an important element in these lessons. On the fiscal front, the discipline should come from the elimination of free lunches by getting the users to pay, on one side, and enhancing the Government’s taxation capability, on the other. While the first element is now being tried out, the second has been largely ignored. This is evident from the loss of a massive amount of revenue by offering an unsolicited tax concession to income and value-added tax payers.

The loss of the Government revenue in 2020 compared to its achievement in 2019 amounted to some Rs. 519 billion or 3.5% of GDP. According to the developments so far, the loss of revenue in 2021 will amount to some Rs. 450 billion or 3% of the estimated GDP. To compensate for the loss in revenue, the Government has resorted to borrowing from the banking sector that is made up of both the central bank and commercial banks. During the period from December 2019 to June 2021, its borrowings from the banking sector had amounted to Rs. 2,854 billion.

This would have led to a massive increase in the money stock had it not been for the outflow of money from the country by way of a decline in its foreign assets. But the money stock during this period has increased by Rs. 2,541 billion or 33%. Sri Lanka cannot continue with this type of fiscal and monetary indiscipline and think of managing its own affairs without IMF.

This is the formidable challenge faced by the new Finance Minister when he prepares the Budget for 2022.

(The writer, a former Deputy Governor of the Central Bank of Sri Lanka, can be reached at waw1949@gmail.com.)