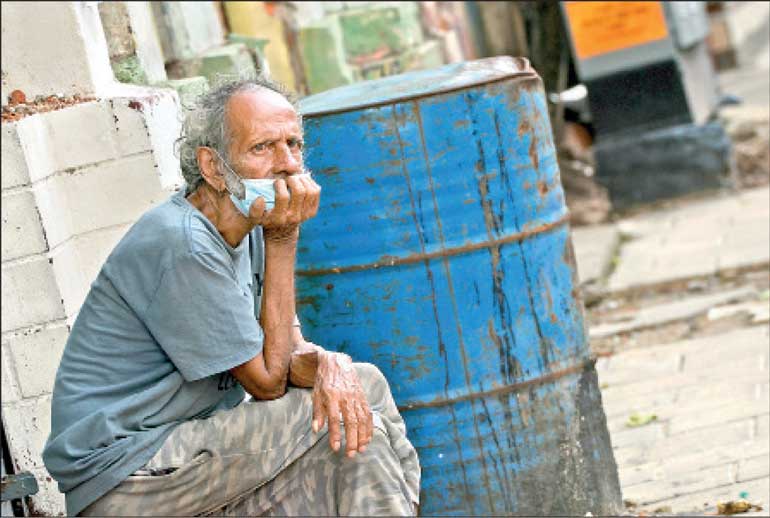 Quarantine ruminations this week are focused on political hypocrisy. Our ‘electoral democracy’ is quietly slipping towards an ‘elected despotism’. In self-isolation, confined to our homes, we have suddenly become aware of what it is to be free – Pic by Shehan Gunasekara

You may proclaim, good sirs, your fine philosophy But till you feed us, right and wrong can wait!

When fear of a virus has frozen our hearts, when rising numbers of dead and dying has muddled our minds, the Government announced the hike of fuel prices.

Explaining its action, the Government has offered a detailed rationale. It refers to the banking system, the exchange rate and the need for an economy dependent on domestic production.

To the masses oblivious to the intricacies of banking and monetary theory, it makes no sense. The multitude are worried about food on the table. The complexity of central banking is the least of their concerns.

There are things the masses are sure of. The past is much longer than was presumed. The future will be vastly different from the past.

If the Government adopted some tangible measures such as scrapping the loss-making National Airline or abolishing pensions of Parliamentarians, the ordinary man would understand that this was a genuine act of remorse over past profligacy.

Obviously, the rationale offered by the Presidential Media Unit is intended to appease the unease of the chattering classes. They above all, find uncertainty an existential ordeal.

According to the rationale released by the Presidential Media Unit, the upward revision of fuel prices was aimed at strengthening “the country’s banking system, maintain low interest rates, reduce foreign exchange spending and strengthen the exchange rate. Further, it was a decision taken to safeguard the health and welfare of the people and to transform the import-dependent consumer economy into an investment and consumer economy dependent on domestic production.”

Just before the announcement of the fuel price hike, the Governor of the Central Bank participated in an online media briefing. The Governor was asked about the planned importation of vehicles for parliamentarians. The Governor said that the Central Bank did not agree with the opening of Letters of Credit to import SUVs for Parliamentarians. “We also got to know about that later.” Governor Lakshman deftly wriggled out of an uncomfortable situation. “It should be asked from the Bank of Ceylon and the State institution that gave instructions to the Bank of Ceylon.”

This exchange between the media and the Governor of the Central Bank made me pull out one of my cherished books on economics for the ordinary citizen. Titled ‘The End of Alchemy,’ it is authored by Mervyn King, former Governor of the Bank of England who steered the bank during the 2008 financial meltdown.

He wrote the book for the general reader, and it presumes no training in economics. Lord King makes it plain and simple. The health of the monetary system is founded on trust. He explains the alchemy that runs through the financial system, whereby governments pretend that paper money can perform whatever they wish.

“During the 20th century, governments allowed the creation of money to become the by-product of the process of credit creation. Most money today is created by private sector institutions – banks. This is the most serious fault-line in the management of money in our societies today.

But banks are also dangerous. They are at the heart of the alchemy of our financial system. Banks are the main source of money creation. They create deposits as a by-product of making loans to risky borrowers.”

Quarantine ruminations this week are focused on political hypocrisy. Our ‘electoral democracy’ is quietly slipping towards an ‘elected despotism’.

In self-isolation, confined to our homes, we have suddenly become aware of what it is to be free. If you cannot step out, meet friends, go to a library to trace some remembered times, you become powerless, suffocatingly sick of the bleak absurdity of it all.

On TV news, the severe and sour Police Spokesman with exaggerated courtesy announces the arrest and detention of ordinary people who for some reason are caught violating quarantine rules. He does not tell you why they were out.

Why do they go out? They go out because most of them have pressing needs to go out. These are people who, for various reasons, must chart a median between submissiveness to dictated rules and their inherent resistance to rules they do not understand.

When the Nazis occupied Paris, Parisians according to philosopher Jean Paul Sartre negotiated between ordinary activity and extraordinary reality. These ruminations are made in somewhat similar circumstances of authority devoid of sensitivity.

It is politics as usual despite the pandemic

One day, we are told that our legislators will soon get luxury vehicles. Then we are told that given the enormity of the calamity we are reeling under, the order has been cancelled. This should not surprise us.

Politicians have always believed that they deserve special treatment. Ordinary rules do not apply to them. They are in the business of serving the people. Serving people must begin with themselves. Elected by the people they need bodyguards to protect them while they engage with the people. While they denounce the role of money in politics, they are dependent on tycoons and oligarchs for financial support.

Long before the pandemic turned us in to “thinking zombies” clamouring for the lifesaving vaccine, representative democracy was on a steady retreat. Authoritarian populism was an irresistible proposition to our business elite and to our traditional religious hierarchies whose entrepreneurial skills are sharpened by their historical role of offering advice and consent to the law givers.

That explains why the Leader of the Opposition, who seems to think that politics is some kind of an undertaking that works on the principle of primogeniture, wanted religious dignitaries to be prioritised for the vaccine.

Let us examine the sequence of events. The urgency of limiting movement emerged only after the Port City Bill was passed. Therein lies a tale. The response to the corona virus and imperatives of the Executive seems to have entered a grey area. It is not confined to Sri Lanka alone. In many countries with strong willed elected leaders, executive prerogatives have superseded or bypassed legislative review.

This pandemic has told us what freedom is, what our freedom was and what our freedom will be. There is no doubt whatsoever that this current restriction on movement is necessary. But we must be alert to the dangers that it can leave behind. When movements are curtailed, monitored and tracked, it opens a Pandora’s Box.

Our freedom should not become a casualty of coronavirus

Then there is also the other side of the coin. Summing up his life in occupied France during the Second World War, Jean Paul Sartre, the French existentialist philosopher, said: “Never were we freer than under German occupation.” He was right.

It is only when we are physically restrained from free movement, that we realise the inherent pleasures of free movement. So, the pandemic has instructed us on what it means to be free. In that tranquil state of mind, confined to our homes, with all the time in the world for reflective thinking, we must unravel the mystery of why the powers that be realised like a bolt from the blue, that Sri Lanka has become a country that, according to the Government’s prognosis, “Not only spends a large amount of foreign exchange for fuel imports, but also a country where its transport services, power generation and the function of some of the factories are based on these imports.”

Then why did the same Government decide to order luxury vehicles for our legislators?

‘New Despotism’ is a book by John Keane, an Australian political scientist. It is a great read in these bleak days of self-isolation. The book offers a penetrative analysis of how power sharing democracies turn in to top-down power-wielding phantom democracies.

This new despotism thrives on a nonstop theatrical extravaganza that encompasses the whole nation. It relies on what the author calls communicative abundance. Opponents are slandered. The leader is extolled. China and Russia are the basic models. Self-aggrandisement is the guiding rule. It is not a single person’s affair. It is a choreographed collective effort. Grand infrastructure projects are undertaken to capture the imagination of a hard-pressed people.

It creates a new middle class who give up their ability to think clearly to think of world-class dream cities with fancy hotels and out-of-this-world airport lounges. They live on dreams and debt. This new middle class is driven by cynical morals and a fickle pragmatism.

There is no doubt that we are in an unprecedented economic crisis compounded by the coronavirus. In more than one sense, it is a struggle to breathe free.

Hunting the hypocrite is a national pastime

The wicked and witty posts on social media indicate that hunting the hypocrite has become a national pastime. Politicians who do not practice what they preach are an affront to our basic intelligence.

For a long time now, shall we say, with the introduction of the executive presidency in 1978 and the introduction of Proportional Representation that made the machine relevant and the person inconsequential, politicians of all persuasions, all hues, all foibles have set themselves apart from the rest of us, making their own rules, following their own values.

To me personally, it is with absolute revulsion that I watch the man who actively subscribed to the physical assault on Professor E.R. Sarchandra, for writing his famous indictment of JRJ’s righteous society, now occupying a ringside seat in the present-day circus.

If you look carefully, most of the ardent defenders of the current dispensation attended their political Montessori in the deepest recesses of the UNP. There will be more fun when the UNP Leader returns to the stage. After all the man got the entire Government benches to scream ‘kawuda hora’ to disrupt a debate on the bond scam.

This unprecedented crisis has removed their masks. It has exposed the real people behind the masks of liberal, neoliberal, socialist, and democratic socialist economics. The inconsistencies and double standards define the name of the game. Obfuscations is the only rule of the game.

Every news clip and voice cut is designed to show that the rival is not as good as he or she pretends to be. There are no winners; we all stand to lose.

Repression of dissent is not the solution. George Orwell is the patron saint of those of us simple-minded people who are in search of integrity in politics. Orwell told us something that we have rediscovered with the fuel price hike: “To see what is in front of one’s nose needs a constant struggle.”