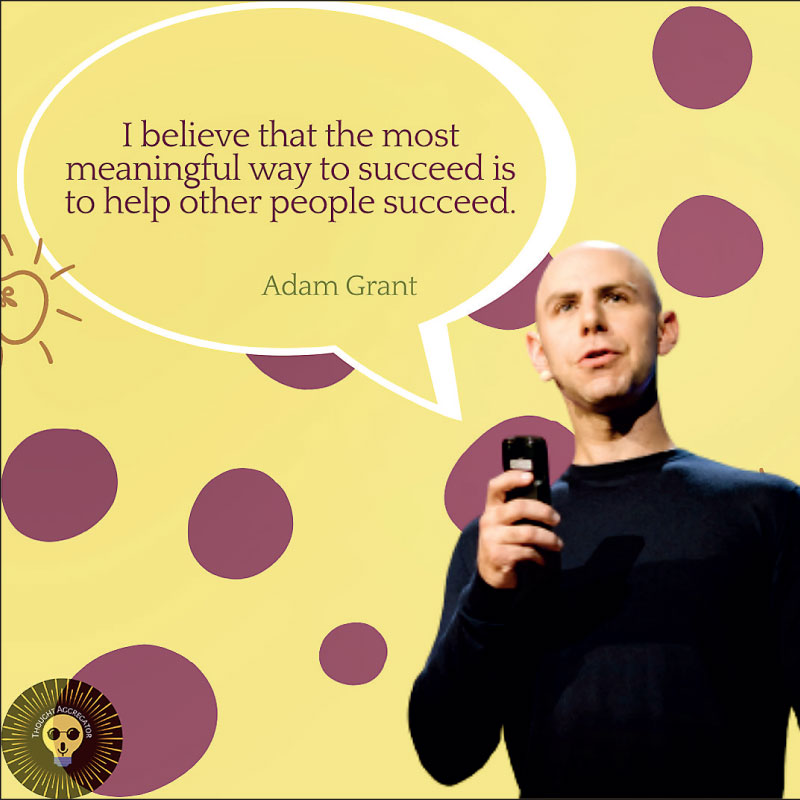 We need to help one another in going through tough times. This is applicable as a team or a community or even as a country. I revisited a rare book I read some time ago by one of my favourite management authors, Adam Grant. I met him once at the Annual Conference of the Chartered Institute of Personnel and Development (CIPD), held in Manchester, UK. Today’s column is all about him and his best-selling book, titled, ‘Give and Take’, in relation to current turbulent times.

Give and Take is the title of a best-selling book that invites us to change our approach towards success. It has simultaneously earned many accolades. It was named one of the best books of 2013 by Amazon, Apple, the Financial Times, and the Wall Street Journal, as well as one of Oprah’s riveting reads, Fortune’s must-read business books, Harvard Business Review’s ideas that shaped management, and the Washington Post’s books every leader should read.

Traditionally, people have focused on the individual drivers of success: passion, hard work, talent, and luck. Adam Grant, a young professor from Wharton Business School, USA thinks differently. Today, success is increasingly dependent on how we interact with others. It turns out that at work, most people operate as either takers, matchers, or givers. Whereas takers strive to get as much as possible from others and matchers aim to trade evenly, givers are the rare breed of people who contribute to others without expecting anything in return.

Using his own pioneering research as Wharton’s youngest tenured professor, Adam Grant shows that these styles have a surprising impact on success. Although some givers get exploited and burn out, the rest achieve extraordinary results across a wide range of industries. Combining cutting-edge evidence with captivating stories, Grant shows how one of America’s best networkers developed his connections, why the creative genius behind one of the most popular shows in television history toiled for years in anonymity, how a basketball executive responsible for multiple draft busts transformed his franchise into a winner, and how we could have anticipated Enron’s demise four years before the company collapsed—without ever looking at a single number.

In essence, Give and Take highlights what effective networking, collaboration, influence, negotiation, and leadership skills have in common. This landmark book opens up an approach to success that has the power to transform not just individuals and groups, but entire organisations and communities. 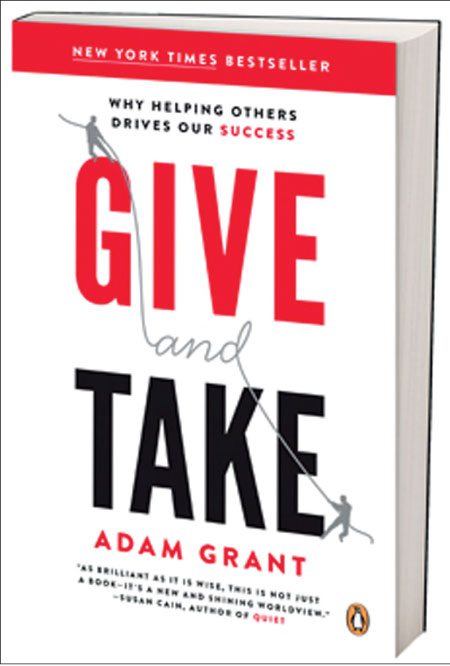 Adam Grant as an advancing star

Adam Grant is a man who has earned many accolades. He is Wharton’s youngest tenured professor and a top-rated teacher. He has been recognised as one of HR’s most influential international thinkers, BusinessWeek’s favourite professors, the world’s 40 best business professors under 40, and Malcolm Gladwell’s favourite social science writers. Previously, he was a record-setting advertising director at Let’s Go Publications, an All-American springboard diver, and a professional magician.

Adam’s seminal contribution, Give and Take, a New York Times bestseller translated into 27 languages. He has been profiled on the Today Show and in the New York Times magazine cover story, “Is giving the secret to getting ahead?” Adam’s speaking and consulting clients include Google, Facebook, Johnson & Johnson, the United Nations, the World Economic Forum, and the US Army and Navy. He got his permanency as an academic while still in his twenties, and has been honoured with the Excellence in Teaching Award for every class that he has taught.

Adam on Give and Take

It was interesting to see an interview given by Adam Grant to the Mind Matters editor Gareth Cook. We all know what successful people look like. They are the ones who do whatever it takes, the ones with the sharp elbows, the ones who know how to take what is theirs. But there is a different, better path to success, argues Adam Grant, in ‘Give and Take’.

Cook asked from Adam as to how Americans tend to think about the personality of successful people, and what first led him to suspect that this may be wrong.

“Many of us assume that to achieve success, it’s necessary to get at least as much from other people as we contribute to them. If we’re too generous, others will take advantage of us, and we’ll end up running out of time and energy to work toward our own goals. I first started questioning this assumption when I was a senior in high school. I had just applied to Harvard, and I was assigned to an interview with a lawyer named John Gierak. He was extremely successful, with many awards and an impressive track record of representing influential clients.”

“My interview was scheduled to be 30 minutes, but John spent several hours with me, going far above and beyond the call of duty to learn about my values and passions. It was clear that he was genuinely concerned about helping every applicant put his or her best foot forward. I walked away with a clear sense that he had been operating this way all his life, and that it was part of what made him such a trustworthy colleague and committed advocate for clients. Later, this experience and many others like it led me to wonder whether we had it backward when we thought about the link between success and giving. Most of us assume that people achieve success and then start giving back. But what if the opposite is true? Could it be that giving first actually leads people to succeed later?”

“In one of my own studies, hundreds of salespeople completed a questionnaire on their commitment to helping co-workers and customers,” continues Grant. “I tracked their sales revenue over the course of a year. I found that the most productive salespeople were the “givers”—those who reported the strongest concern for benefiting others from the very beginning of their jobs. They earned the trust of their customers and the support of their co-workers. Similar patterns emerged in a number of other fields, and before long, I had many data points showing that the most successful people in a wide range of jobs are those who focus on contributing to others. The givers often outperform the matchers—those who seek an equal balance of giving and getting—as well as the takers, who aim to get more than they give.”

One may tend to think whether there could be people who give a lot genuinely taken advantage of. Perhaps they might end up exhausted. Adam shares his views on this.

“This is the sharper edge of generosity: I found that the salespeople with the lowest revenue were also passionate about helping co-workers and customers. In fact, across a number of jobs, givers were overrepresented at the top and the bottom of various success metrics. Some of the generous salespeople were exploited by co-workers who stole their customers, others spent too much time with individual customers to be productive, and many just burned themselves out.

Can being a ‘giver’ be a gamble? How can one guarantee that one will end up being one the successful givers, and not among the legions of the burnt out? This is how Adam looks at it. “I see it less as a gamble, and more as a question of strategy. Ultimately, the biggest difference between the givers who rise to the top and those who sink to the bottom is the boundaries that they set. Givers who burn out consistently put the interests of others ahead of their own, sacrificing their energy and time and undermining their ability to give in the long run. Those who maintain success are careful to balance concern for others with their own interests. Instead of helping all of the people all of the time, they help many of the people much of the time. They are careful to give in ways that are high benefit to others but not exceedingly costly to themselves.

Having read the book and listened to its author, I started thinking on us, Sri Lankans. Are we more givers, takers, or matchers? Culturally, Asians had been more like givers, but not any more. Globalisation has made cultural barriers broken. We see a mix of givers, takers and matchers in the Sri Lankan society. We are witnessing an interesting time with political summersaults, aptly showcasing givers, takers, and matchers.

As we are heading towards more turbulence with possible shortages of food and medicine, increased suffering among masses is sadly obvious. Can we offer a helping hand by one way or the other in the true spirit of giving? Can we share the limited resources such as offering transport for needy? Can we assist the daily wage owners at least by giving some regular work? These may sound petty and naive comparative to the magnitude of our economic challenges. Yet, we can show our humane approach in offering a helping hand to the needy.

My take is simple. A giver never regrets. I am so happy to be in a profession that demands to be so.

(The writer is the immediate past Director of the Postgraduate Institute of Management, and can be reached through ajantha@pim.sjp.ac.lk, ajantha@ou.edu or www.ajanthadharmasiri.info.)