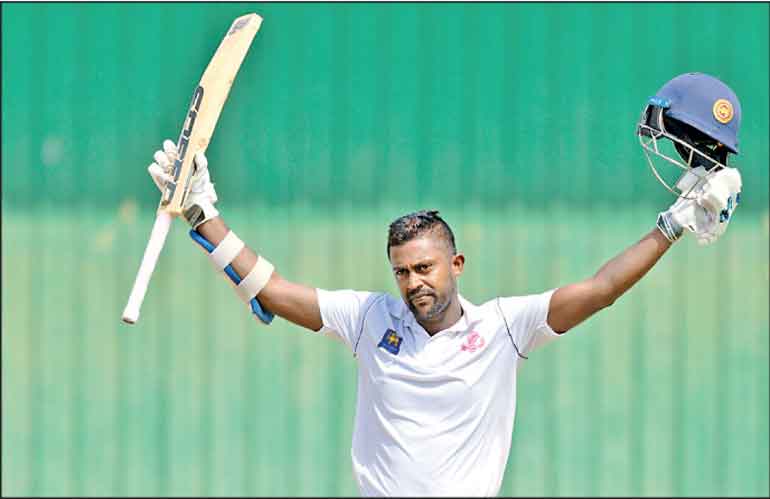 But Ace Capital SC in their reply fared no better, being shot out for 82 with the leading wicket-taker left-arm spinner Kaumal Nanayakkara taking his eighth five-fer of the season (6/33). Army SC extended their overall lead to 97 by scoring 46-3 in their second innings by stumps. Twenty of the wickets were taken by spinners.

Sebastianites’ ambidextrous spinner Tharindu Ratnayake took six wickets for 58 runs – his 15th five-fer to spin out Kalutara TC for 210 at Moors SC grounds. In reply, Sebastianites were 102-3. Saracens SC choosing to bat first at the R. Premadasa Stadium struggled 232-7 against Badureliya SC thanks largely to a captain’s knock of 82 (7 fours, 2 sixes) from Sithara Gimhan.

Ravindu Fernando’s maiden first-class century (105 off 126 balls, 7 fours, 5 sixes) and his 142-run stand for the seventh wicket with Dilum Sudeera 50* (4 fours) enabled Tamil Union to rattle up 348-7 against Negombo CC at the P Sara Oval. Ron Chandraguptha contributed with 70 (8 fours, 1 six) at the top of the order.

Chilaw Marians SC rode on former Cambrian opener Vishwa Chaturanga’s splendid innings of 172 off 182 balls (20 fours, 6 sixes) and Kasun Vidura’s knock of 113 off 135 balls (12 fours, 4 sixes) to post 367-4 against Bloomfield at Bloomfield grounds. Both batsmen were involved in a 186-run stand for the third wicket.

Colts scored 315-8 against Police SC at Police Park where Avishka Perera 53 (6 fours), Hashan Dumindu 75 and Dhananjaya Lakshan 78 (4 fours, 2 sixes) made fifties. Ragama CC were made to sweat the entire day on the field at Thurstan College grounds after inviting Kandy Customs CC to bat first and seeing them put up a total of 321 courtesy a century from Vishwa Wijeratne (102 off 195 balls, 13 fours) and a fifty from Imesha Udayanga 67 (11 fours).

Pasindu Sooriyabandara hit a workmanlike 123* off 191 balls (13 fours) as Moors SC put up a challenging score of 336-5 against SSC at the SSC grounds. Sohan de Livera contributed 70 (7 fours). All the matches will continue on its second day today.