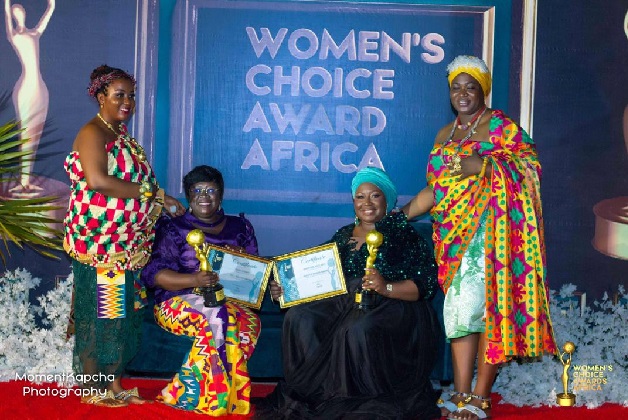 Some distinguished women who are doing amazing jobs in the Ghanaian society have received various awards at the 2021 Women’s Choice Award Africa.
Among them were Patricia Obo-Nai, CEO of Vodafone Ghana who was adjudged Ultimate Woman of The Year and Helene Wessie, MD of Guinness Ghana, who also took home the Woman-Led Company of the Year award.

The 3rd edition of the Women’s Choice Award was held at the Labadi Beach Hotel in Accra on Saturday under the theme: ‘The progressive portrayal of women– its impact on Organisational and National Development’.

Hosted by actress Nikki Samonas and TV presenter Jay Kojo Daasebre, the award was held to honour and celebrate the achievements of outstanding women, men, and groups who are contributing to society.

Gifty Anti, in her acceptance speech, recounted her journey from the media, through academia, to religion and finally, into the traditional circles.
In dedicating her award to every woman, she charged the younger generation: “Don’t silence your voice. Speak out! Let no man intimidate you. God gave you a voice for a reason. Those of you who are afraid to speak up, let me tell you this – You Are More Than Enough. Speak; for your voice is your power.”

In all 21 value-driven awardees presented with plaques and citations. Actress Gloria Safo picked the actress of the Year, Caroline Sampson- Media Personality of the Year Award and renowned First Vice Chairperson of the World Scout Movement, Jemima Nartele Nartey won Superwoman of the Year; while CEO of RedGingerforHair, Christine Kastner, took Woman CEO of the Year.