MANILA, Philippines — Almost half of Filipino families feel poor as of the third quarter of 2021, while only a fifth feel “not poor,” new survey results by the Social Weather Stations suggest.

The survey also found that the self-rated “food-poor” are 30% of families, the borderline food-poor are 44%, and the Not Food-Poor are 26%.

These figures are a slight improvement from the 48% of self-rated poor families in the last survey in June 2021. However, more Filipinos now feel Borderline Poor compared to the 23 percent in June, and fewer Filipinos rated themselves as not poor from the 23% then.

The Third Quarter 2021 Social Weather Survey conducted face-to-face interviews of 1,200 adults with sampling error margins of ±3% for national percentages and ±6% for Metro Manila, Balance Luzon, the Visayas, and Mindanao.

According to SWS, the number of self-rated poor families fell in the Visayas and Metro Manila while borderline poor families rose in all areas except Mindanao.

“The three-point decrease in Self-Rated Poor in the third quarter of 2021 was due to a sharp decline in the Visayas and a slight decrease in Metro Manila, offset by a steady score in Balance Luzon and an increase in Mindanao,” the report reads. 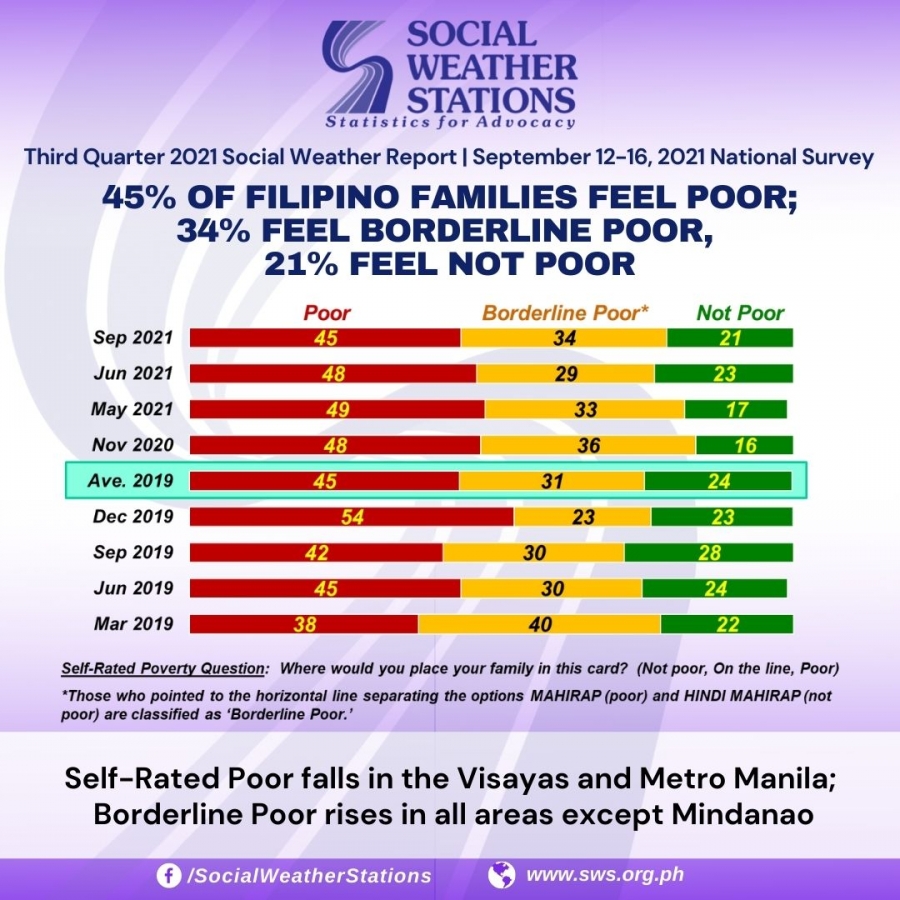 Interview respondents were asked to point to where their family stood in a self-rated poverty showcard with “poor,” “not poor,” and a line bordering the two.

If poor, families are asked:

To date, 17,853 active cases of the pathogen remain in the Philippines, where health authorities have recorded 2.83 million coronavirus infections since the beginning of the pandemic.