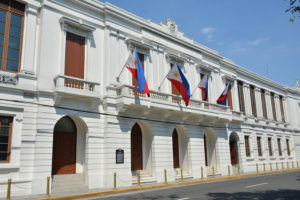 THE national government’s (NG) debt stock dipped to P12.5 trillion as of end-May, a month before the end of former President Duterte’s term.

From a record high of P12.76 trillion as of end-April, the NG’s outstanding debt was trimmed by 2.1 percent or P267.41 billion, mainly due to its full repayment of its P300-billion short-term, zero-interest loan from the Bangko Sentral ng Pilipinas (BSP), the Bureau of the Treasury said on Friday.

However, the debt stock ballooned by 12.9 percent year-on-year from P11.07 trillion.

Despite this, the Treasury said these more than offset the effect of the net repayment of foreign debt amounting to P12.05 billion.

Outstanding guaranteed debt of the NG as of end-May also stood at P399.72 billion, down by 3.3 percent from P413.43 billion recorded in the previous month, owing to the repayment of both domestic and external guarantees amounting to P8.41 billion and P6.48 billion, respectively.

By the end of this year, the government expects the country’s outstanding debt to soar to P13.42 trillion.

The NG’s debt-to-GDP ratio as of the first quarter of the year rose to 63.5 percent, above the internationally recommended 60-percent threshold by multilateral lenders for emerging markets like the Philippines. It is also the highest since the country’s debt-to-GDP ratio hit 65.7 percent in 2005 under the Arroyo administration.

Finance Secretary-designate Benjamin Diokno earlier vowed to keep the country’s debt-to-GDP ratio within the “sustainable threshold” while balancing the need to sustain the country’s economic recovery.

Diokno, who is set to leave his post as BSP Governor, said the Marcos Jr. administration will be “opportunistic” on foreign borrowings and will continue to keep its bias on domestic borrowings as the peso crossed the P55 territory last Wednesday, reaching its weakest level against the US dollar in more than 16 years.