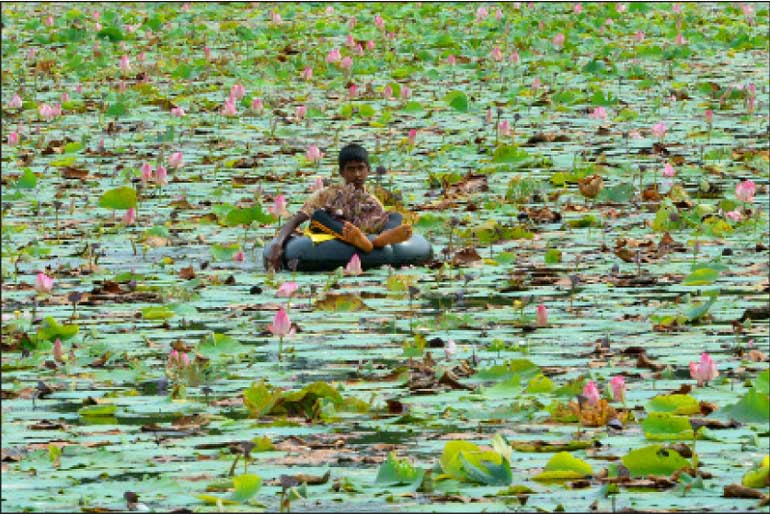 The world and everything in it have been created for man for his use and enjoyment. Thus, Tawheed binds all of humanity in this common platform. Man, however, has fashioned to himself divisions and distinctions in relation to colour, race, ethnicity, geography, caste, rich and poor – Pic by Shehan Guansekara

In the previous article on 13 May in Daily FT, monotheism as the foundation of the three Abrahamic faiths, Judaism, Christianity and Islam was explained. The positions were substantiated with scriptural references from all the three faiths.

This declaration, to a Muslim, influences his interaction with religion, family, society, economics, politics, culture, etc. In Islamic theology Tawheed is the precursor towards establishing a Godly society, Godly law and Godly system. Therefore, it is not one of spirituality alone but, is connected with the worldly duties and responsibilities of man, which may be broadly categorised as (1) The relationship of man with his God. (2) Man’s relationship with his own self. (3) Man’s relationship with society. (4) Man’s relationship with nature. This constitutes the overall foundation for human civilisation based on values of piety, truthfulness, equity, justice, love, and beauty.

Everyone submits to “Fitra”

Abu Jaafar Ibn Thufail. (c. 1185), Arab Philosopher in his famous work ‘The Improvement of Human Reason,’ demonstrated, “By what Methods one may, by the mere Light of Nature, attain the Knowledge of things Natural and Supernatural; more particularly the Knowledge of God, and the Affairs of another Life.” (‘Philosophus Autodidactus’ – ‘The Self-Taught Philosopher’).

John Locke, was greatly influenced by the thoughts of Ibn Thufail. Other legends of modern Western philosophy and the Scientific Revolution such as Thomas Hobbes, Isaac Newton, and Immanuel Kant were some others who followed Ibn Thufail’s thinking. (See: Samar Attar, ‘The Vital Roots of European Enlightenment: Ibn Tufayl’s Influence on Modern Western Thought’.)

Long before these Philosophers, Prophet Muhammed (May peace be upon him – PBUH) said: “No baby is born but upon ‘Fitra’. It is his parents who make him a Jew or a Christian or a Polytheist.” (Sahih Muslim, Book 33, Number 6426). 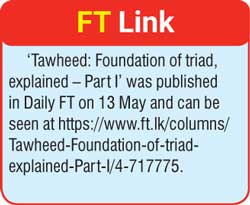 The Arabic term ‘Fitra’ means, the state of purity and innocence; the “innate nature”. This refers to the natural disposition of any new born baby. The infant reacts not according to instructions or directions of anyone; neither does it have any acquired knowledge from outside to act on its own. But, the infant with certitude responds instinctively, purely on the inbuilt nature. This is one of the meanings of the ‘Fitra’ that the Prophet Muhammed (PBUH) was referring to.

The Quran states: “So, direct your face toward the religion as a man by nature upright – the nature (Fitra) made by Allah, in which He has created man. There is no altering (the laws of) Allah’s creation. That is the right religion, but most men know not.” (Chapter 30 Verse 30).

No person, be it the greatest scientist, reformer, philosopher or, the greatest whoever, has ever been able to live outside the laws of nature (Fitra). Every person submits to this innate nature of his whether he likes it or not or, whether he believes in God or not. They are the essentials for human existence.

In the Arabic language, the triliteral letters (Siin-Lam-Miim) depicted in English as “SLM” inter alia, refers to this submission. Innumerable derivations with variant meanings may be constructed with these letters. Some examples are: ‘Silm’ – Peace; ‘Tasleem’ – a person who submits; ‘Islam’ – Submission to Allah; ‘Muslim’ – a person who submits to Islam and so on. Thus, at childbirth, every child is born in this state of submission, conformance and obedience to the ‘Fitra’. There can never be any alteration to the laws that Allah has created. At a universal level, the sun cannot be made to rise from the West and settle in the East. The Quran emphasises:

“Whatever beings there are in the heavens and the earth do bow (prostrate) themselves to Allah (acknowledging subjection), – willingly or unwillingly, as do their shadows in the morning and evenings.” (Chapter 13 Verse 15).

Lundstedt, the Scandinavian Realist questioned, “What would happen to human beings if legal activities were discontinued?” Little imagination is necessary, this would mean the collapse of society and the destruction of human beings. (Legal Thinking Revised, 1956). Would the status be any different if the legal activities continue nominally but, is as good as discontinued? Then, too, the collapse of society will be evident.

The quintessence of Tawheed is that it aims at creating a direct relationship between God and man. At the primordial stage this relationship was in coherence with the crude requirements and desires of man in that epoch say, at the hunter-gatherer stage. As man gradually progressed from his primordial state to a more complex social structure due to circumstances, he became enslaved in various ways, against his will. This condition requires liberating man from subjection. The freeing of man from the perception of fear which drives him to be subservient to phenomena in the natural world like earthquakes, the corona virus pandemics, etc. Freeing man, who, with hope and fear, surrender to superstitious views and other forms of mythical beliefs and irrational practices.

In the same vein, to free man from all forms of worldly fetters by which he is entangled and, to unshackle him from the chains of bondage, both physical and psychological. Through this liberation, Islam endeavours to create for man an environment wherein he can think and act freely, without bias or prejudice or coercion, using the intellect and intelligence bestowed on him. Both as an individual and, by the use of the collective wisdom of the society. Consciousness, hope, fear, submission and surrender is only to God. What Tawheed does is to clear and open the path for man to ponder and appreciate God and His creations. Islam does not force any human to follow it and the freedom to choose any religion is respected.

“There is no compulsion in religion. The Right Path is clear from the wrong path.” (Chapter 2 Verse 256).

The world and everything in it have been created for man for his use and enjoyment. Thus, Tawheed binds all of humanity in this common platform. Man, however, has fashioned to himself divisions and distinctions in relation to colour, race, ethnicity, geography, caste, rich and poor.

The caste system among Tamils in Jaffna is seen as very rigid with inequality, discrimination and social rejection driven by the notion of untouchability.

Speaking about the variances in human societies, the Quran states: “Mankind were but one community; then they fell into difference.” (Chapter 10 Verse 19).

Tawheed unequivocally rejects all sorts of discrimination, difference or distinction that man has created among themselves. In the Islamic worldview everyone is considered the children of that One God. Naturally, therefore, the entire human kind is equal. No one is unequal than another in service, ownership, status, wealth, colour, caste, etc. The universal brotherhood of humanity is thereby established on the basis of this uncompromising equality.

“O mankind, We have created you male and female, and appointed you races and tribes, that you may know one another.” (Chapter 49 Verse 13).

God created differences of race, tribes, colour in order to identify and know each other and not to take pride and boast about one’s self. Nor, for one man to discriminate or look own upon another man. Prophet Muhammed (PBUH) who was an Arab said that an Arab and a non-Arab are equal. In Islam, all are equal.

There can never be perfect justice within the human realm. The limitations and incapacities of man denies him this perfection. Man does not have the ability to read the hidden emotions, feelings, thinking, perception of another human. More so, even of his own self. Besides, there cannot be a perfect man-made system which can dispense complete and absolute justice.

In addition to the existential limitations, frailties in terms of greed for power and the desire to remain in power, have failed to protect the citizenry from the arbitrary whims and abuses of their ruler. God is the best to provide to man the laws and guidelines for legislations because God is aware of all the propensities of what He has created. Just like the car manufacturer knows everything about the car that he has manufactured.

The Quran says: “Stand out firmly for justice, as witnesses to Allah, even as against yourselves, or your parents, or your kin” (Chapter 4 Verse 135).

In Islam, justice is inextricably entwined with eschatology (the part of theology concerned with death, resurrection and judgement). Therefore, belief in the Day of Resurrection and the Day of Judgment i.e., life in the Hereafter, forms part of the foundational criteria of a Muslim’s creed. A Muslim believes that Allah is the Master of the Day of Judgment. No bribe, political influence, nepotism, favouration, bias or prejudice nor discrimination. There are several verses in the Quran which refers to this belief.

“And who believe in (the Quran) which has been sent down (revealed) to you and in [the (Torah) and the Injeel (Gospel), etc.] which were sent down before you and they believe with certainty in the Hereafter” (Resurrection, rewarding for good and bad deeds, Paradise and Hell, etc.) (Chapter 2 Verse 4).

In this sense, the one who violated justice and the one to whom justice was denied will witness perfect justice dispensed by God. This will be applicable not only for the Muslims but for the entire mankind, irrespective of whether they believed in God or not. We know that not all humans believe in the Day of Resurrection and the Day of Judgment. Nonetheless, on the Day of Judgment, every person will be raised before God and asked to render an account of his/her deeds.

“This Our Record speaks about you with truth. Verily, we were recording what you used to do” (Chapter 45 Verse 29).

The need for a Day of Judgment is both logical and rational. Not every person gets justice for the wrong done against him or her. There are several instances when the justice done is not proportionate to the wrong or crime committed. As per the legal doctrine of proportionality, can perfect justice be meted out in a human court, in the case of a person convicted of multiple murders? For example, Hitler’s genocide. However, God has the power to do whatever in order to ensure that proper justice is dispensed to all the victims of injustice.

“And He is the one who gave you life; then He causes you to die and then will [again] give you life. Indeed, mankind is ungrateful.” (Chapter 22 Verse 66).

(In Part III, ‘The Relevance of Tawheed to State Governance and Accountability’ will be addressed.)

(The writer is an Attorney at Law and former Corporate and Legal Advisor. He can be reached via email ctcolumn@yahoo.com).