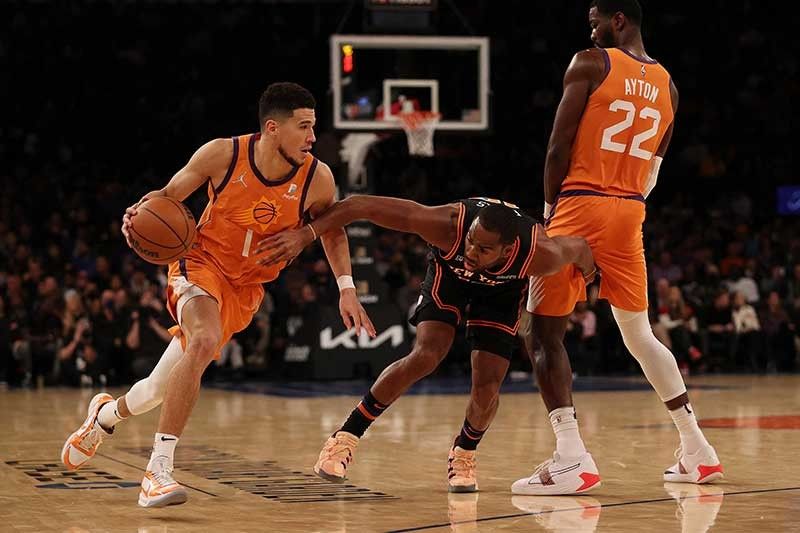 MANILA, Philippines — The Phoenix Suns and the Golden State Warriors remain on top of their game as they extended their respective winning streaks on Friday (Saturday, Manila time).

The Suns, for their part, are three wins shy of a franchise record winning streak after taking their 15th win in a row in a dominant, 118-97 win over the New York Knicks at Madison Square Garden.

It was all Phoenix save for a first the opening salvo where the Knicks momentarily had the lead.

Devin Booker led the way for seven Phoenix players in double-digit scoring with a game-high 32 points.

Chris Paul chipped in with a double-double of 14 points and 10 assists.

Julius Randle, for his part, was limited to just single digits in scoring for the Knicks with nine markers.

Elsewhere, the Golden State Warriors remain at the summit of the West standings as they won their 17th game of the season, beating the Portland Trailblazers, 118-103.

The Warriors used a second quarter where they outscored the Blazers, 31-18, to pull away for the win.

Stephen Curry and Andrew Wiggins led the charge for the Warriors with 32 and 25 points, respectively.

The rest of the starters also finished in twin-digit scoring.

It was Golden State’s sixth win in a row.

Also in the midst of a win streak are the Atlanta Hawks who picked up their 7th win in a row.

Trae Young posted a double-double of 31 points and 10 assists to tow the Hawks past the Memphis Grizzlies, 132-100.

The game saw Ja Morant exit for Memphis due to an injury that was ruled an ankle sprain.

Meanwhile, the Indiana Pacers leaned on a balanced team effort to drub the Toronto Raptors, 114-97.

Domantas Sabonis led the way with 23 points and 18 boards.

For their part, the Washington Wizards and the New Orleans Pelicans squeaked by their respective opponents with close wins over the OKC Thunder and the Utah Jazz, respectively.

The Milwaukee Bucks, led by Giannis Antetokounmpo, stretched their win streak to six with a 120-109 victory over the Denver Nuggets.

The San Antonio Spurs took their fifth win in a row after taking down the Boston Celtics, 96-88.

The Chicago Bulls rebounded from their loss against the Houston Rockets with a 123-88 blowout of the Orlando Magic.

The Charlotte Hornets and the LA Clippers also took wins over the Minnesota Timberwolves and the Detroit Pistons, respectively.

In the final game of the day, the Sacramento Kings outlasted the Los Angeles Lakers in a triple overtime thriller in Staples Center, 141-137.