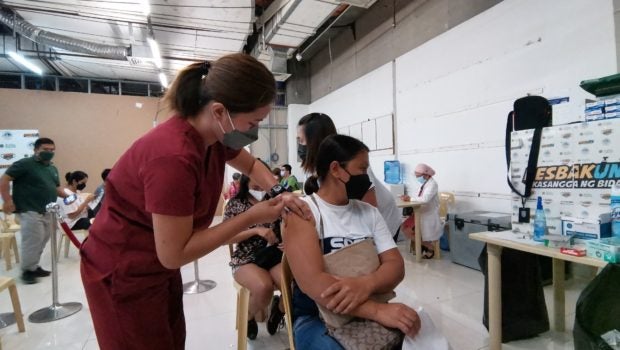 MANILA, Philippines — Only half a million COVID-19 vaccine doses were administered so far during the first day of the three-day national vaccination drive on Monday, the Department of Health (DOH) reported Monday.

Health Undersecretary Myrna Cabotaje announced that 547,628 individuals have received a COVID-19 vaccine dose as of 4 p.m.

This figure is way off the target of three million on the first day of the inoculation drive, although the DOH said that less than half of the participating vaccination sites have yet to turn in their report.

The DOH said their data came from 2,974 inoculation sites in 903 local government units (LGUs). This is about 48 percent of some 1,600 participating LGUs across the country.

The delayed reporting of vaccination data is one of the challenges that the national immunization program faced, Cabotaje said.

(Our vaccination sites are used to vaccinating in the morning and transmitting the reports at night because they’d rather do the vaccination than do the reporting.)

Aside from the late reporting, the DOH also observed other challenges. These are the inability to accommodate walk-ins and minors and overwhelming response in some areas.

There were also certain vaccination centers where the response of the public was overwhelming that most of the people turned up early but ended up creating bigger crowds and longer queues.

(So, the turnaround time, because there are many people, became longer.)

The national immunization program is set from November 29 to December 1 with a goal of administering nine million vaccine doses, lower than the government’s initial target of 15 million.

Another national vaccination drive will be held on December 15 to 17.